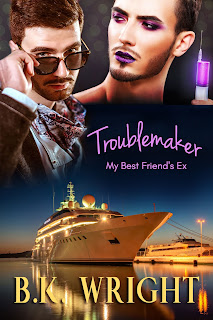 They didn’t know a murderer had boarded the ship. Speaking of… has anyone seen Gordy’s ex?

Gordy had nearly thrown his back out the weekend he and his best friend Gary were tempted to a night of fun in the sun with a couple of young interns. After that, the two cardiologists had decided to take a bigger bite out of life.

Technically it was against the rules to date doctors they mentored, but the young, sexy duo had been too tempting to pass up, and it was the young bloods that had suggested the romp after several days of grueling surgeries.

And it was worth it. The tight young bodies in their beds were just what the doctors ordered. They taught those two a few things, and they also realized they weren’t getting any younger as they tried to keep up with the young studs. That was one reason they had decided to splurge on a cruise. If the fountain of youth was out there, they were determined to find it. And it wasn’t just any cruise. They were embarking on the first all gay cruise to set sail from the U.S. Florida coast.

What they didn’t realize was that Gordy’s ex, who was more than a little bit dangerous, had joined them on the big ship, and he wasn’t quite ready to say goodbye to his sweet life with a wealthy cardiologist.

Get it on Amazon and Kindle Unlimited!