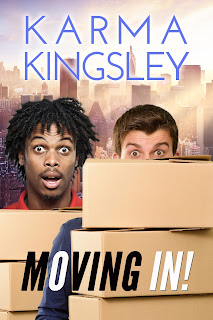 Moving In [RoomMatch, Book One]
by Karma Kingsley
Link: http://a.co/7vOWVHU

Rye Winters lives life on his own terms. Even when his family disowned him for dropping out of medical school, he pushed forward for a career path that he loved. Nothing keeps Rye down...except that he’s gay and terrified to tell anyone. It’s the secret that haunts him, suffocating him to exhaustion. But it’s a secret he can’t trust with anyone. That is until Chase Evans. His RoomMatch pairing that changes his life and shows him just how gay he really is.

Chase Evans by most standards is a failure. He’s a failure at writing, a failure at socializing and a failure at love. In hopes of changing his path, he packs his bags and leaves Lexington, Virginia behind. With the help of the RoomMatch App, he finds himself a cheap apartment in Harlem, New York and a charming roommate that helps him to come out of his shell and his comfort zone. But things get wonky when he finds out his roommate may be a little friendlier than he can handle. 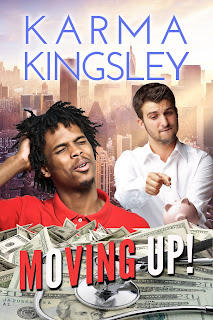 As Chase struggles with his sexuality a newfound job opportunity and a hospital orderly with the hots for Rye threaten to drive them apart before they even have a chance to get started. Can they beat the odds or did RoomMatch get it wrong? Maybe they weren't the perfect pair.